The metadata concerning GTRD is stored in MySQL tables.

'dnase_experiments' table has the following structure:

The links to external databases stored in 'external_refs' table:

The relationship between these objects is provided by a 'hub' table:

ChIP-seq and DNase-seq reads, alignments and peaks links to experiments with hub table in the following way:

Web interface to GTRD is available here. It provides capabilities for searching and browsing GTRD.

The ChIP-seq experiments contained in GTRD can be queried from the search box on the Start page. GTRD uses Lucene engine for indexing and quering ChIP-seq experiments that provides rich syntax for searching. The search can be performed by transcription factor(name or UniProt ID), cell line, antibody or treatment/conditions.

For example, to search for STAT transcription factors you should input 'stat*' in the search field and press 'Enter'. You also can restrict the query to a certain cell line and treatment, e.g. to HeLa cells treated with interferon, using the following query:

Similarly, it is possible to search by publication author, year or title. To search by full article title, quote it:

To search by author or publication date, use "articles:" prefix. For example to search for experiments authored by Snyder in 2007:

To view peaks or alignments click the link in the ChIP-seq experiment information box, the

track will be opened as table. The

GTRD is organized in hierarchical Repository. 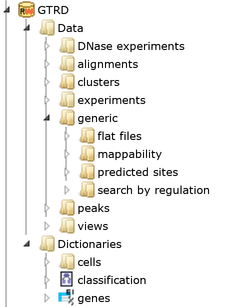