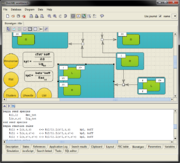 BioNetGen (BNG) plugin for BioUML 2020.4 aims to combine two representations of the rule based model in BioUML:

Plugin allows user to edit model both as BioUML

diagram and BNG-text. Visual representation being changed BNG-text is updated on the fly.
Text changes are applied to the

diagram on demand (after "Apply BioNetGen" button have been pressed).
Besides model representations synchronisation, also care is taken of preserving user

diagram layout as well as BNG-text formatting (spaces, comments, etc.)
Please note: text changes would be applied only after "Apply BioNetGen" button have been pressed. If

diagram is changed before this button have been pressed, all changes in text will be lost!

Scheme for species adding via BioNetGen

Scheme for reaction adding via BioNetGen

It is allowed one to recreate appropriate BNG-text. If "Recreate text" button is pressed text will be recreated using

diagram.
Note: all text formatting and some of comments (which are not linked with existing nodes or variables) will be removed.
"Deploy diagram" button being pressed deployed model is generated. Deployed model corresponds to the model created by source BioNetGen using generate_network action. If there exists this action in the BNG-text BioUML use its parameterts otherwise default parameters are used. Source

diagram will be substituted by deployed

diagram (it will not be saved without pressing of the save button, and will have "_deployed" suffix in its name).
Note: source

diagram won't be changed and won't be replaced.

Currently plugin is in beta version, so some features of the BioNetGen aren't supported. Also we want to achieve full synchronisation between BioNetGen and plugin.

Note: plugin also does not support changing of the species' initial value in the actions block.